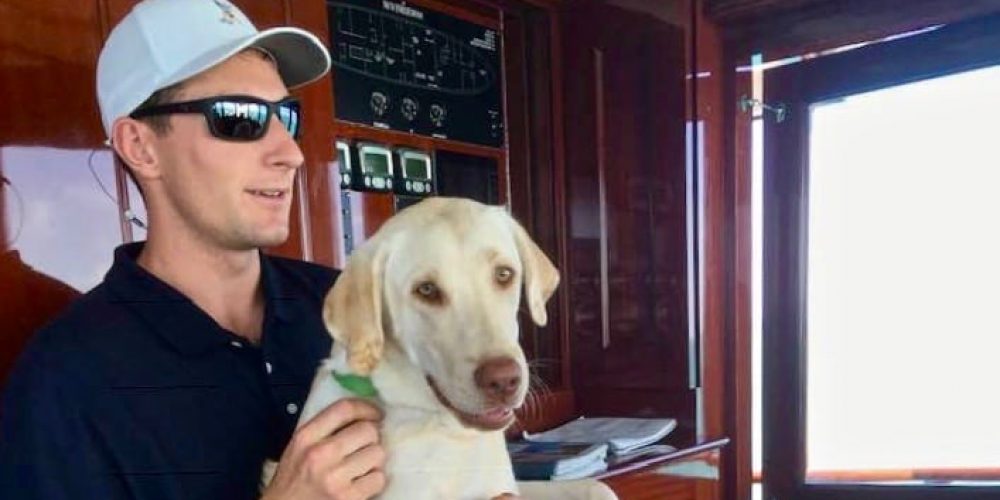 Chris O’reilly was kind enough to squeeze in an interview with Select Yachts during a very busy visit to Fort Lauderdale. He is charming, eloquent and clever. When we commented that he has a very keen memory, he said with typical humor, “just for boats, nothing that will make me money”. We think he’s incorrect. He’s found his true calling as a yacht captain, which is not really surprising. We know he’ll be very successful.

Chris is from the idyllic New England port town of Greenwich, Connecticut. He grew up sailing on Long Island Sound. Pretty much from birth, he was out with his family on Dad’s boats. Dad was really into boating and they would often cruise up and down the Connecticut shoreline. Chris was five or six years old when he first took the helm. Dad just instructed him to “aim between the twin towers” on the New York skyline. They would cruise around New York harbor and Manhattan, past the Statue of Liberty. It was a very special time.

A few years later, Chris was running the boat, heading out with friends and rafting up together. Yachting with Captain Chris, then and now, meant enjoying life on the water. Today, he is the experienced and endearing Captain on LADY SHARON GALE. We sat down for a chat over a cup of coffee.

Here’s what he told us:

“I went to college and never really pursued a career in the marine industry. That is mostly because I always wanted to be a firefighter in my hometown. For years I was a volunteer, and always wanted to get hired, but they never hired me. They hired a lot of people coming out of the service with medical backgrounds, like EMTs and paramedics.

Next, I went out to work for a commercial shipping brokerage company for a year and a half, but didn’t bring in enough business. Then I worked at the Riverside Yacht Club. There was always lots of drama and intrigue to witness, which made it fun. And then I found the Newport broker that lead me to FREEDOM!”

Yachting with Captain Chris aboard FREEDOM:

“When I started working on FREEDOM, a 1926 Trumpy and sister ship to the presidential yacht SEQUOIA, built-in 1929, the Captain was kind of just down and out. The last Fourth of July we were at Chelsea Pier with this whole group of New York City, very trendy people on the yacht, when the Captain gets a phone call. There was some serious disturbance at his house, and he was very upset talking to his wife and kids.

I’m up at the helm, just happy as a bee, driving this gorgeous, classic wooden yacht, up to the George Washington Bridge and down towards the Statue of Liberty. Driving this yacht called FREEDOM around the Freedom Tower. Heading up the East River and there are all the Macy’s fireworks barges. I was just thrilled. Admittedly though, there’s nothing like driving that boat FREEDOM into Edgartown Yacht Club in Martha’s Vineyard. Classic New England!

The yacht FREEDOM was originally built for a man in Boston who ran out of money. Then a lady named J.W. Donahue, who was the heiress to the Woolworth’s department store fortune, bought it. When she purchased it in the late 1920s it was the largest, private motor yacht in the United States.

Think about it, FREEDOM was built during the Great Depression. They refit her from 2003 until the launch in 2009.  She was refit during the depression of 2008, so incurred two depressions, during the original build and the rebuild. There are not too many classic wooden yachts afloat, and likely none with such a history of survival.”

LADY SHARON GALE is a beautiful yacht and we have a really great crew.  We’re based in Saint Maarten until July when we head down to the Grenadines and Grenada.

My ideal charter would be to take the guests to St. Barths and have a mate that I could leave on board to tend to the yacht. I would bring them ashore for the day, either rent ATVs and go all around St. Barths, or hire a taxi and take everyone to Nikki Beach, which is kind of like a big beach-party drinking venue. In the evening, everyone could dine off the yacht or dine aboard. Chef Johann’s food is absolutely superb.

The following day I’d bring LADY SHARON GALE around to what I call it ‘The Forbes Anchorage’, because Malcom Forbes and the Rockefellers have big estates up there. It’s one of the more secluded anchorages in St. Barth’s.

You can walk from the beach to the eastern side of St. Barth’s where Cheval Blanc and Nikki Beach are, and several other very expensive, exclusive places that sell a hamburger for 40 euros. Understandably, some people prefer to put the brakes on all that spending, especially with a great chef on board.

It’s really all about the mile-long walk. You’re on the windward side of St. Barth’s where there are cliffs. It’s a beautiful trail through the forest with turtles on the side of the path, and people leave water out for them.

Next, we’d cruise to Anguilla. What’s really nice to do is to take the tender and go on a house tour. The northern side is a really steep cliff and there are beautiful, modern houses that are stunning architectural masterpieces, somewhat like those on the Southern California coast. There are also very private beaches, if people want to set up on a secluded beach, have a picnic and enjoy the water toys.”

LADY SHARON GALE will be spending the summer, 2019, chartering in St.Lucia, the Grenadines and Grenada.  Chris is really looking forward to showing his guests the magnificent Pitons, the marine life of Tobago Cays, and the shipbuilding culture of Bequia, just to name a few highlights.

Captain Chris is very enthusiastic about teaming up with a terrific crew to give guests a charter to remember. If you can’t book LADY SHARON GALE this summer, they’ll be back in Saint Maarten in the fall, when Chris will be hosting guests on his ideal charter once again.

LADY SHARON GALE is a highly customized 112′ Broward superyacht. She is ideal for island hopping in style. Powered by Detroit Diesel engines of 1800 HP each, LADY SHARON GALE reaches a speedy 18 knots and happily cruises at 12 knots. Indulge in a yacht that offers classic styling, elegant interiors, an energetic crew, and gourmet chef at a remarkable rate. LADY SHARON GALE accommodates 10 guests in four staterooms.