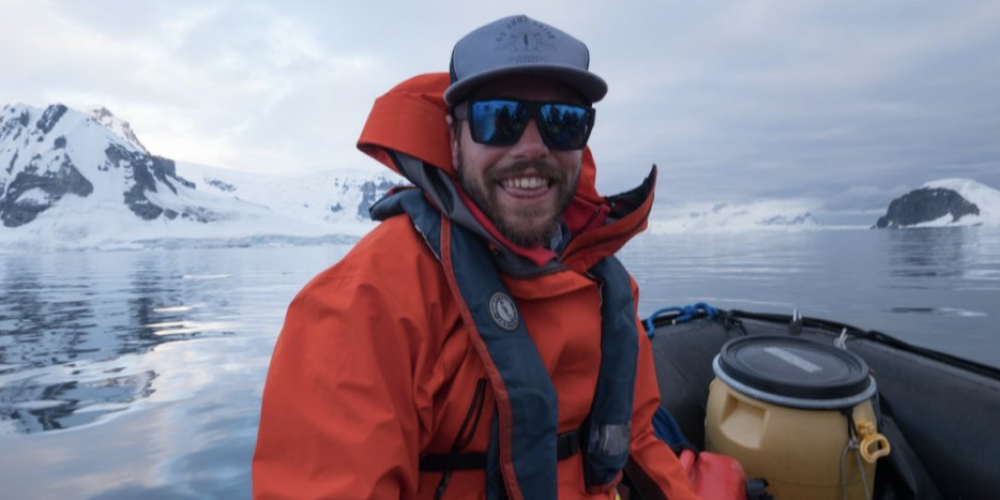 Simon James Lucas does not shy from a challenge.

He’s an adventure seeker and a Renaissance man. He has degrees in zoology and wildlife management. He’s been a gold miner, painter, builder, maintenance engineer, house cleaner, wedding photographer, filmmaker, videographer, story teller and yacht crew. Now, he’s the Captain aboard expedition yacht GREY WOLF. He’s been to the end of the earth and back and he wants to take you there. Here’s why you should go.

Simon grew up on the ocean in the small, seaside town of Whangaparaoa near Auckland, New Zealand. The beach town nestles on the spectacularly beautiful Whangaparaoa Peninsula, surrounded by sea. His dad is a marine engineer. Simon knows about boats, inside and out. “I’ve been on a boat since the womb. Dad retrofitted his yacht to have baby seats, so he and mum could take the kids cruising. So, I have always been at home on the sea.”

When Simon entered university, he planned on pursuing a degree in marine biology. But, he could not ignore his love of the mountains, of nature and of wildlife. Ultimately, he achieved a BSC in Zoology and a Post Graduate Diploma in Wildlife Management, which allowed him to incorporate both. After completing his university studies in 2010, Simon set off to discover the world. He explored much of the planet; Europe, North and South America, Africa, Caribbean and the South Pacific.

Simon is an award-winning film producer.

“One of my best experiences was a two-month canoe trip from Canada to Alaska. During this adventure I directed the award-winning documentary; Paddle for the North. Six mates, two dogs and 900 miles of wilderness. It really taught me a lot about being self-reliant, living simply, and story-telling. I have been an amateur photographer and videographer. I love the story telling aspect. I go to remote, adventurous places. I bring a piece of that wilderness back with me and reveal it to the world.”

In his early twenties, Simon spent three seasons mining the gold mines of Northern Canada. In between seasons he had the opportunity to crew on a sailing yacht delivery, enthusiastically logging 18,000 miles in just eight months. He realized how much he missed being out at sea. Was it destiny that led him to cross paths with Peter, Owner of explorer yacht GREY WOLF? Could such perfect casting be a coincidence? Of course, Simon would not pass up the rare opportunity to command such an extraordinary vessel.

Simon is very keen on chartering in Antarctica.

“I was very fortunate to participate in a filmmaking expedition in Antarctica and will never forget it. The combination of mountains, ice and wildlife is mind-blowing. It’s somewhere you can’t really describe without going there. I never thought I would see so many animals at the end of the earth. Also, the sense of scale. Our boat was dwarfed by massive ice bergs of all shapes, sizes and colors.

During this trip we climbed Mount Scott with the Antarctic Heritage Trust. It took 18 hours ascending through mist, crevasses and ice walls, until we successfully summitted the mountain. But we’d missed the window to return to the boat.  So, we had to sleep on the ice. Our landing site was a pile of rocks. We spent an hour digging around and moving boulders to create a space to lie down.

Finally, when we had all tucked in for the night and were admiring the amazing ocean view, looming up out of the darkness we saw a perfectly formed ice phallus. I thought I was hallucinating. We looked at each other and we all burst into laughter. It was anatomically perfect. It was 40 feet high. If the wind changed, it might come ashore. Death by Antarctic phallus. But, when dawn arrived it had vanished. We realized we were the only people who would ever see it… I can’t wait to get back there!”

Contact Select Yachts today. Don’t you deserve the opportunity to experience the end of the earth with Simon and crew?